Finally! Another quest from our well known heroes, Sjengis Khan the barbarian, Eddy Wizzard the wizard, Elly the Elf and Butchmath the Dwarf.
This time they venture into the Forbidden Caverns, a series of dark caves where ceilings can haphazardly collapse on the unwary adventurer, and seemingly endless streams of the undead roam around... 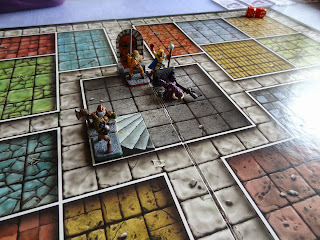 Loretome did not have much information about these caverns, so out heroes went in, only knowing no adventurer had ever made it out alive to tell about them. So as the barbarian prudently searched for traps in the first room, but found nothing, Eddy thought it safe to search for lost treasure... A wandering monster appeared: a mean looking chaos warrior! Poor Eddy immediately lost one body point, but Elly quickly loaded her crossbow and killed the fiend on the spot. 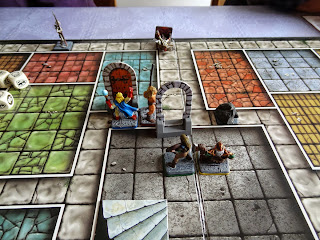 "Not such a good start eh?" Butch observed. He and Elly decided to wait for Sjengis to open the door and check the hallway beyond, but as soon as the turn ended, two skeletons were placed on the board, and started moving towards our heroes...
Outside in the cavern stood one skeleton, making it impossible to search for traps, but Sjengis stepped aside, and out of sight, he searched the immediate left to right cave for traps. There were none. 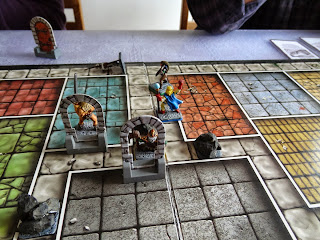 Elly quickly shot the skeleton, and as Sjengis opened a door into an empty room, Butch found a weak spot in the ceiling in the main corridor.
Eddy chose to simply walk around it, and so did the rest. 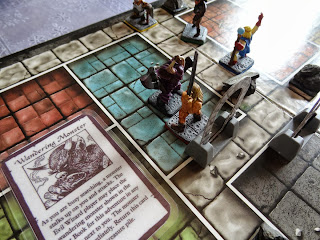 Finding no traps in the previous round, Sjengis quickly searched for treasure this time, and found another wandering chaos warrior... 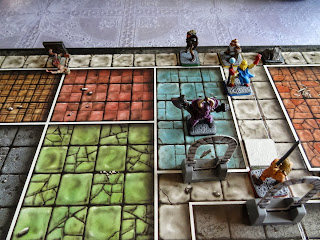 He decided to try and kill it, but after failing to do so, he turned and ran. He did not get far, but this way he could block the chaos warrior's path to the others. 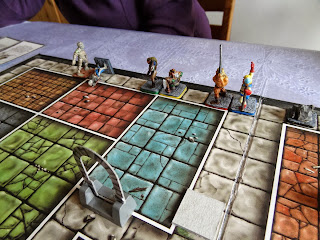 Meanwhile the Elf shot another zombie coming their way from around the far corner. After the chaos warrior followed the barbarian, but was blocked, Sjengis slew it and followed the others. 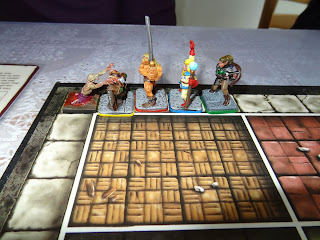 It was becoming clear now that new undead entered the caverns every turn, so the heroes figured they needed to find the exit quickly, or get overrun by undead... 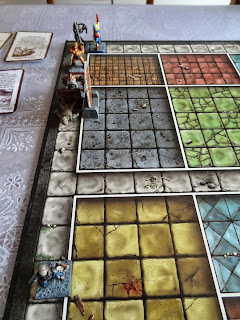 As they rounded the next corner, it occured to the Elf that the corner spot was one of the places where new undead kept spawning, so she tried a new tactic: stay on that spot and see what happens...

More undead did spawn, but not at the corner the elf was in. "Good! Let's clear this next corridor and get to the next spawn point!" said the wizard. 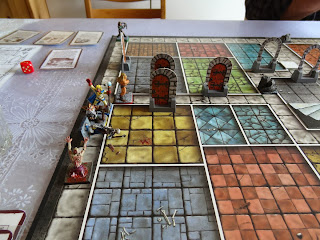 Each turn more vile undead creatures turned up, and as they battled their way through the caves, the heroes spotted several doors along the way. They decided it was probably best to avoid more rooms, as they might contain even more monsters, and they might even get trapped inside. 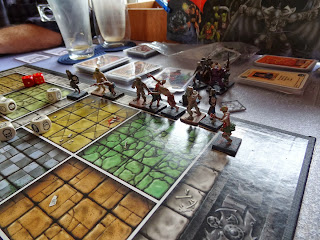 The other side of the board was also quickly filling with shambling hordes of undead, so it seemed obvious something important could be over there, such as an exit. 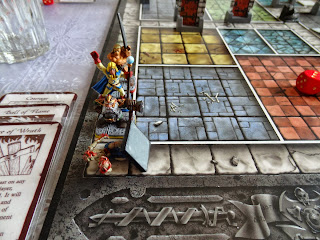 Arriving at the next corner, more undead were slain, and the dwarf took up position in the corner, to prevent more undead from spawning from behind. 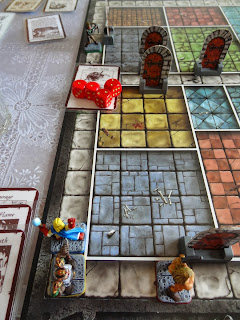 Now it was time to formulate the next strategy... How to best approach the east of the caves, hopefully finding the exit, while maintaining a possible escape route back, should the exit be in one of the rooms they passed by.

Eddy cast Swift Wind on the elf, hoping she could quickly catch up, and leave any possible undead far behind her.
She rolled a very unlucky 6 on four dice, so she didn't get as far as the others hoped.
"That's okay, you go on ahead, I'l scout this corridor!" she shouted "I can use my cloak of passage if I get stuck".
Eddy decided to go along with her, as he could always follow her through any wall with his earth spell. 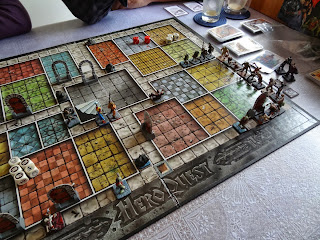 And so the others ventured on. At the next juncture the dwarf got hit by a falling rock trap, and as the ceiling caved in, he lost two body points. He was able to search for traps on the next turn, as the undead down the cave were now no longer in sight. But before doing so, Sjengis Khan the barbarian tried to follow the dwarf, and fell into a pit trap...
"Well, at least now we have a pit that might stop the undead from following us, so I suggest we go through the center of the caverns from here" Butch decided. 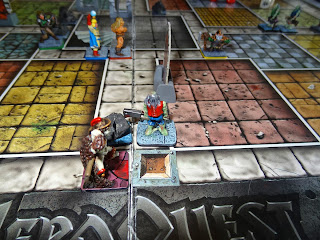 Meanwhile Elly and Eddy found out that the corridor they were in ended in a dead end, and the passage that the dwarf and barbarian had passed was already filling up again with undead, so they both passed through the rock wall after the barbarian had made sure there were no further traps nearby.
As the undead shambled after the four heroes, they started jumping over the pit trap, and to their surprise, a lot of them managed to jump over and follow the heroes! 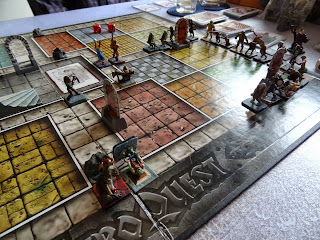 Fortunately, some also fell in and died, but now new undead were approaching from the east.
Elly and Eddy were forced to wait it out while the Barbarian cleared the next corridor one undead at a time, so they decided to take a chance and scout some rooms they passed. Eddy decided to cast Rock Skin on Sjengis, allowing him 2 extra defense dice as long as he did not get any damage. 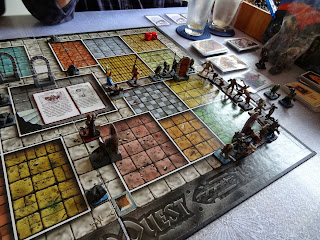 After shooting some zombies with her crossbow, Eddy also enchanted Sjengis with Courage, giving him battle rage and two extra combat dice in attacks as long as he could see monsters.
Then the elf and the wizard opened the room with the red tiles, and searched for traps. 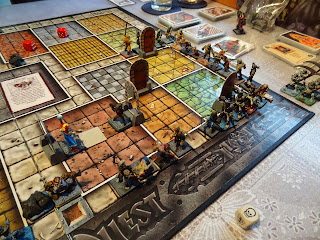 Staying clear from the unstable ceiling, they found no other traps, and opened the next room.
The dwarf blocked the other side of the pit, so no undead could attempt to jump over it, while slaying some with his bastard sword with which he could attack diagonally. Meanwhile the barbarian quite literally inched forward, his skin hard as stone and frothing at the mouth with rage! 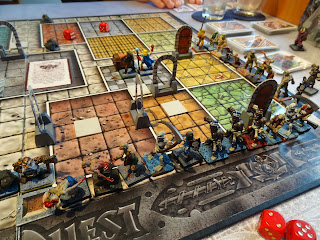 The next two rooms also had unstable spots on the ceiling, but rather than trying to disarm the traps, they simply avoided them, and found a chest in the last cave. Sadly, it was empty...

Meanwhile, Sjengis got hit by a skeleton and lost his rock skin enchantment! 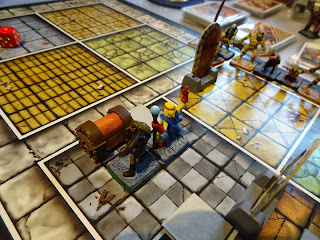 Frustrated at the loss of time, they headed back, but decided to search for treasure while heading back out. Elly found a mere 10 gold, and poor Eddy triggered a dart trap while searching for gold. 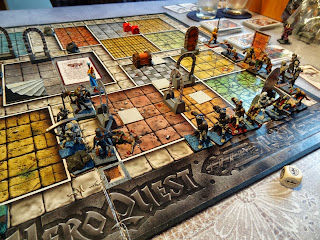 More and more undead jumped over the pit after Butch retreated with the others, but more also fell in. But with two more monsters entering each round, the stream was endless! 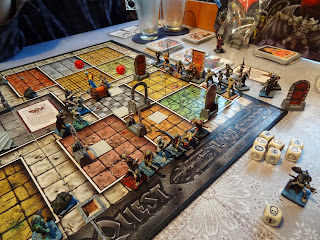 Sjengis had managed to battle his way to another spawning point, and waited there for the others to join up with him, so they could block the square and prevent new undead to spawn nearby.
As if suddenly caught by rage, the undead surged on after them. "Quickly! to me!" Sjengis shouted as he killed another undead minion. 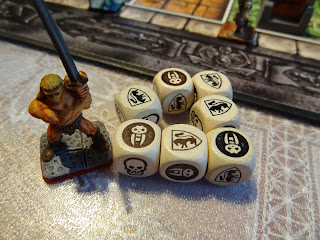 Low on health, the barbarian used up one of his porions of resilience, again granting him a temporary 2 extra defense dice when a zombie hit him for two points of damage. He rolled miserably! He and the dwarf were now down to 2 body points!
Fortunately, both Eddy and Elly still had their healing spells, and healed the brave warriors back to health. 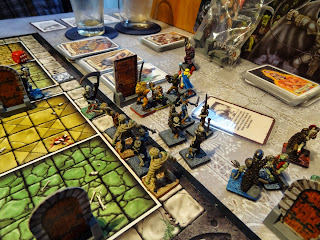 Finally, Sjengis killed the final zombie in front of the now visible exit door! "Fly, you fools!" he shouted, and one by one, the others ran past him, the undead hot on their heels. Sjengis headed out last, and slammed the door shut behind him.

On and on they ran, glad to be alive and hoping their next adventure would bring them more fortune and less monsters...
Posted by: Sjeng @ 18:26

Crawling in the other dungeons...

Heroes who travelled this land...

Write for this blog ?