The making of Dwarf Quest: part 1

Hi! My name is Dylan, and just like all of you I'm a long-time fan of HeroQuest. In the upcoming three blog posts I'd like to tell you about what I love about it, and how it inspired me to make a tribute computer game in 1992, and a remake of that one in 2012.

As a kid I had already gotten a taste of fantasy board gaming and roleplaying through The Dark Eye (Das Schwarze Auge in German) and Dungeons & Dragons.

My brother would host games for me and my friends, allowing us to let our imaginations run wild. Instead of using the regular cardboard representations of heroes and monsters, we started to collect and paint Games Workshop miniatures. You can imagine my joy when I stumbled upon HeroQuest in a local toystore a few years later! 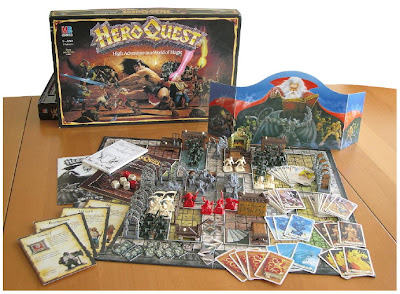 When HeroQuest came out in The Netherlands back in 1990, I had just started highschool. At a certain point, whenever one of our classes would be cancelled, a few of my friends and I would race to my house. We'd have just enough time to play one mission. Owning the game itself and knowing the game best, I would assume the role of Morcar, controlling all of the monsters. However, within soon a number of my friends would buy the game too, and many play and miniature painting sessions followed. 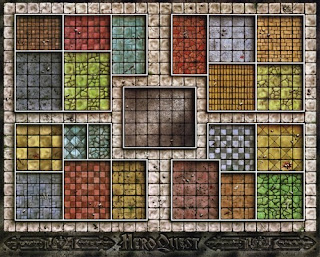 Besides the fantasy setting and the physical figures, the big appeal of HeroQuest lay in the board itself. Even though it seemed quite static at first, its layout would host unlimited numbers of dungeon rooms and corridors. Every time your hero would step onto the board, a new floorplan would emerge. Elegance was key here: not by placing walls but merely doors would those rooms and corridors be visualized. Those chambers featuring a furniture piece would instantly become interesting: surely it would hold treasures beyond imagination?

Equally impressive was the drive and focus that resulted from this design. Although each mission was unique, they were essentially all the same: explore the dungeon, search for treasure, combat monsters and return to the spiral staircase. After the first quest, any player would understand how the game worked, and would already be focused on finding more loot and defeating more bad guys.

By including only 'regular' six sided dice instead of the many different types in other games (d4, d8, d20 etc), HeroQuest had a casual, almost mainstream appeal as well. It would lure non-gamers in, only to offer surprising depth and replayability through the various treasure and spell cards. I loved how the basic rule set was very compact, and was expanded upon through these cards. 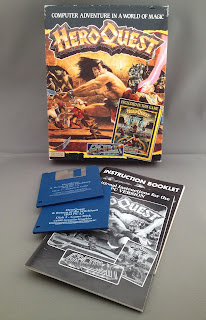 At a certain point, I found the PC version of HeroQuest. I practically bought on the spot, it becoming the first PC game I paid for with my own money. I remember well how steep the investment was at the time, but obviously it was worth every cent. At home I quickly installed it using the two 3.5" floppy disks. The intro cinematic felt very strange, with an alien color palette and agressive visuals. I was glad to find the game itself to be faithful to the original board version. And it even included the quests from the Return of the Witch Lord expansion set!

The colorful graphics did a great job of conveying the board, which had been cut up into parts, each screen showing a section. The perspective was isometric, offering a good overview of spaces and monsters and items in them. Combat was a bit clumsy by forcing you to select your opponent through the map rather than directly. Still, it was fairly fast-paced and exciting. I sure appreciated all the healing potions and spells, often needed after a bloody fight!

My biggest complaint about the computer game was and still is: whereas the board version needed multiple players to be enjoyed, on the PC you could play by yourself. Unfortunately, that only felt like a hollow version of the original HeroQuest. Without Morcar, without any buddies to help you on your journey and brag to about your loot, it was the same kind of experience as so many other games out there. While it was still good, it had lost its magic in the conversion.

Crawling in the other dungeons...

Heroes who travelled this land...

Write for this blog ?